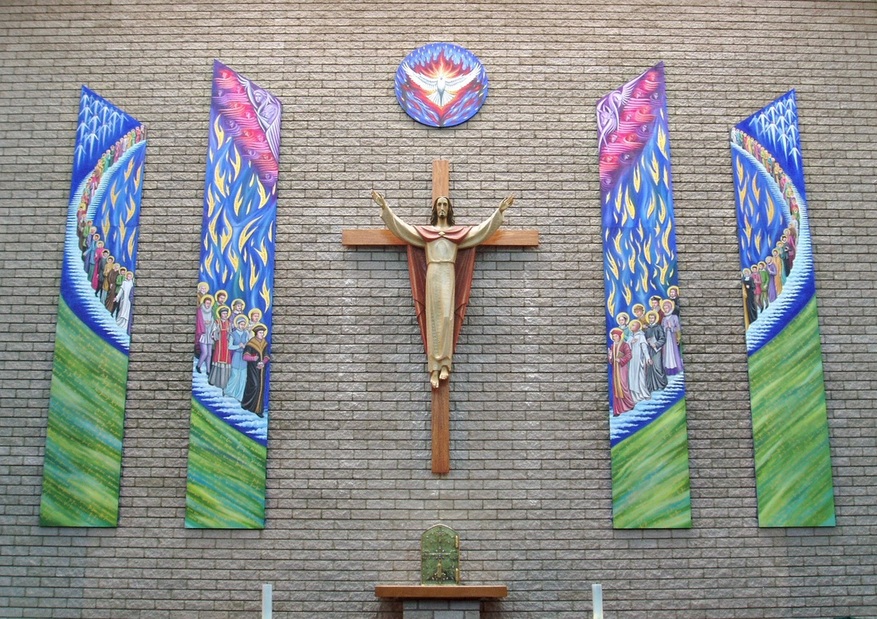 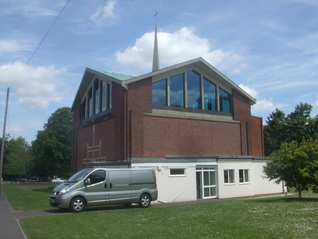 English Martyrs Catholic church in Hillmorton (Rugby) was originally opened in 1966 but was provided with a new sanctuary in 1982, formed by reorientating the interior towards an extension on the east side. The new focal point of the interior was an altar wall of grey brick, lit from above and relieved only by a small crucifix, which was later replaced by the present Risen Christ figure.


The church was originally adorned with four huge abstract stained glass windows by artist Leonard Jonah Jones, but these were sadly removed in 2010 as a result of partial structural failure and replaced by vast expanses of double glazing, leaving the interior lighter but plainer than ever. 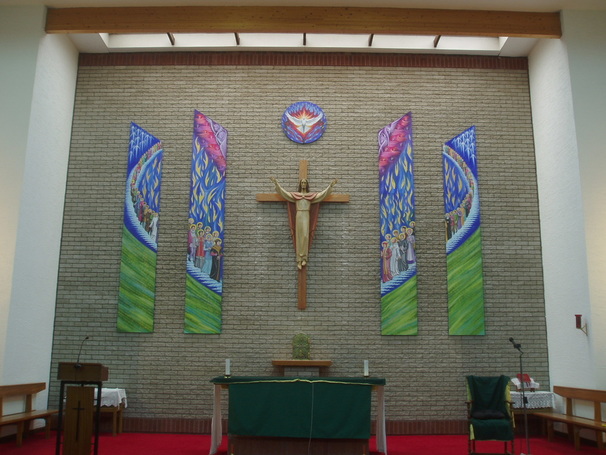 I was asked in late 2014 for ideas about relieving the grey monotony of the altar wall and enlivening it with colour. There was no budget for piercing the wall and adding new stained glass, so I suggested adding large panel paintings with a columnular format to frame the central Christ figure. I had suggested some fairly abstract compositions initially, but the theme of the English Martyrs was chosen as there was no imagery in the building to indicate the church's dedication.

What followed was a difficult balancing act, trying to create a contemporary work whilst portraying the Tudor martyrs in their respective likenesses and costumes, which seemed like a contradiction in terms. However treating the scheme as a procession of martyred individuals, most of whom were to be shown at a great distance, thus leaving the bulk of the area to be treated more in terms of colour and space around the more detailed depiction of 16 more recognisable martyrs in the central panels, allowed more scope.


The end result incorporates the names of all the recorded English Martyrs, the 43 sainted individuals being written within the flames that rise above the main procession of figures, whilst below in the green 'landscape' are the names of over 600 martyrs and confessors, in many cases beatified, all of whom died for their faith between 1534 and 1781.

At the top are angelic beings, culminating in the symbols of the Four Evangelists, whilst higher still is a circular panel representing the Holy Spirit in dove form, shown in a burst of flame which both conceals and consumes the gallows of Tyburn, where many of the martyrs were executed.
The most recognisable / best known of the English Martyrs are featured in the two groups of larger figures that flank the central Risen Christ figure (which was raised up the wall by over a foot when the panels were installed to form a more satisfying composition). The figures are shown in two groups of eight, with a prominent front row of more recognisable saints (in some cases based on known likenesses such as the work of Holbein in the case of the two leading martyrs) and a further row glimpsed behind.

The right hand group is led by St John Fisher, followed by St John Houghton, St Edmund Campion and St Margaret Ward. Behind them (also left to right) are St Anne Line, St Nicholas Owen, St Edmund Gennings & St Ralph Sherwin.
Other martyrs (only a couple of which are directly based on specific individuals, since the figures are much smaller and less detailed, and portraits are only available for a limited number) are shown in diminishing scale on the outer panels as they become ever more distant towards the top. Many are shown in priestly robes, since a large number of the martyrs were ordained. 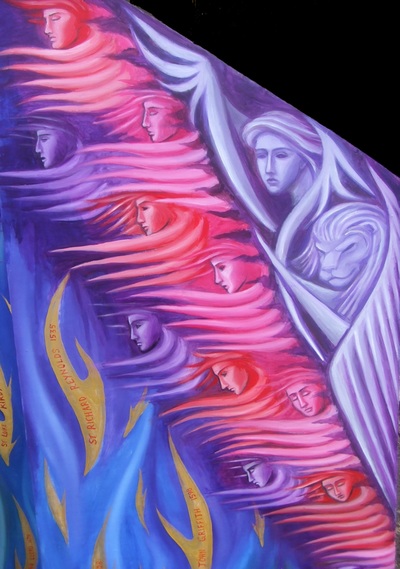 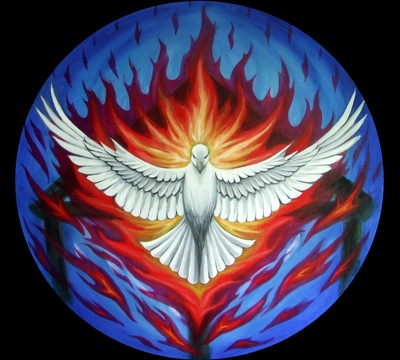 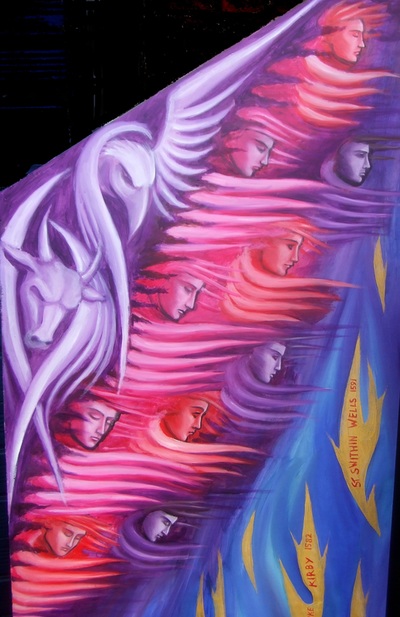 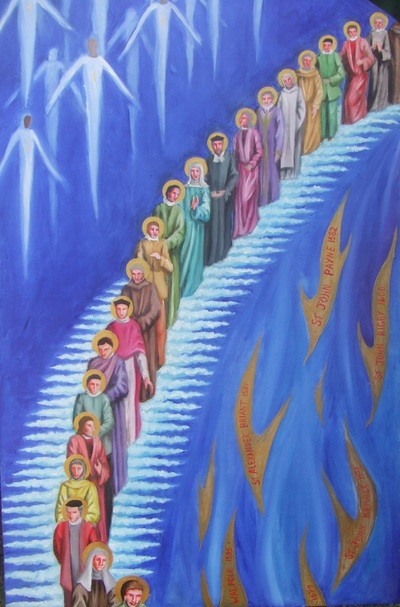 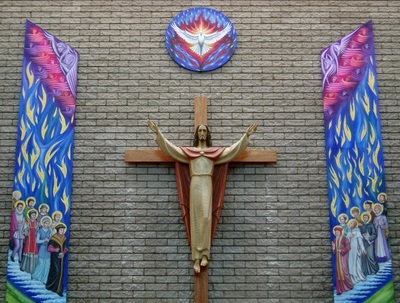 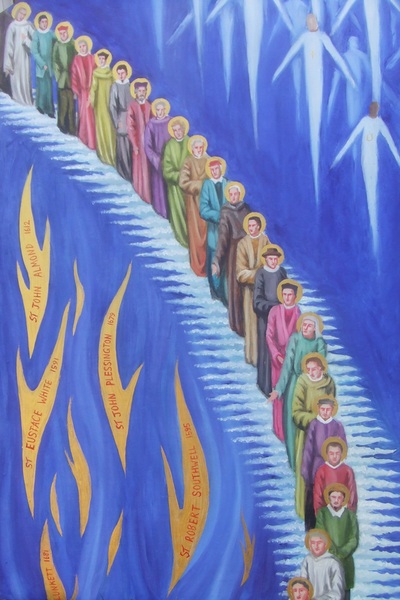 The paintings were installed on Wednesday June 24th after several months work. I am hugely indebted to both Tim Clevely and Steven Cartwright for all their hard work, transporting and installing the scheme for me, a sterling effort that is hugely appreciated.
Also due thanks to my sister Elspeth Thomson for taking most of the following photos of the installation in progress. 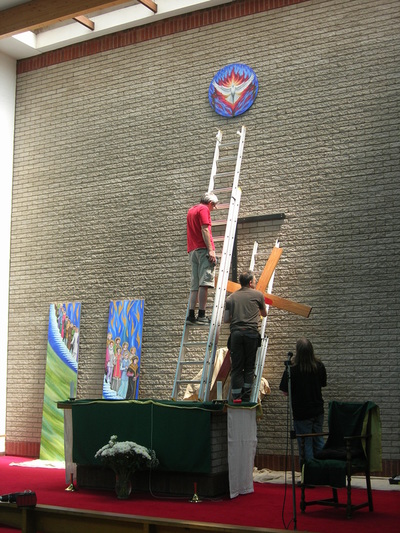 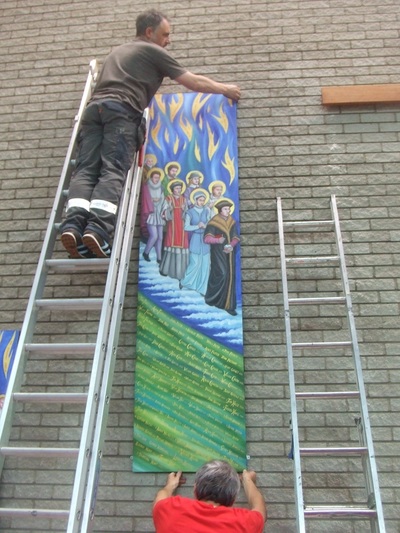 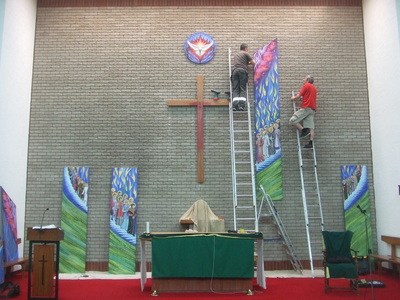 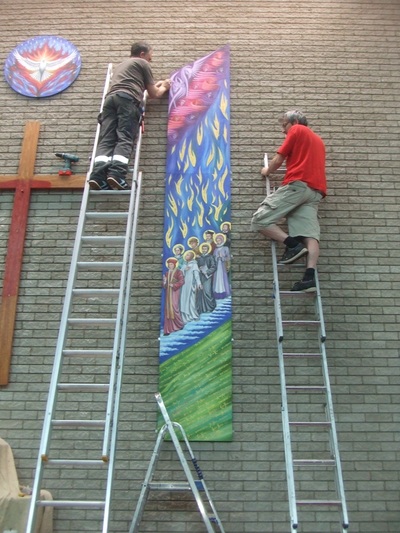 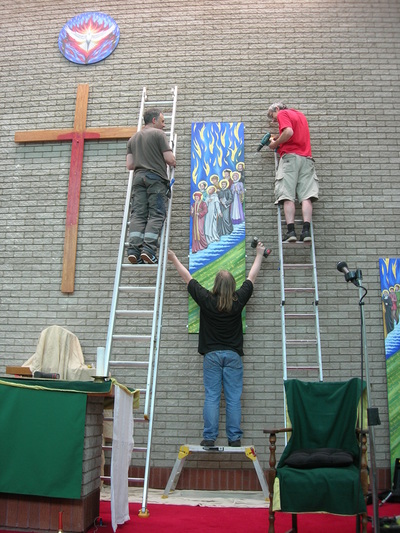 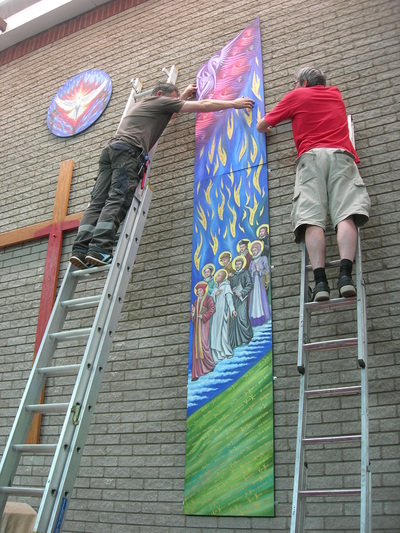 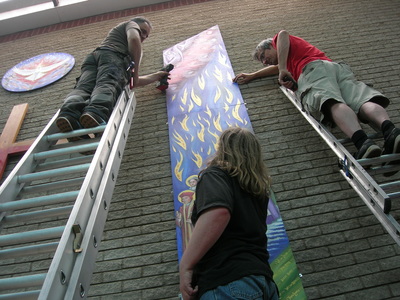 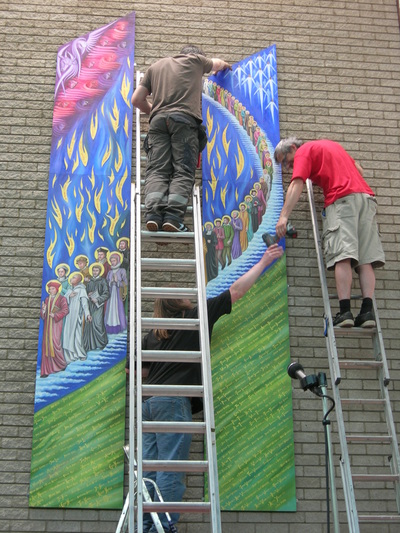 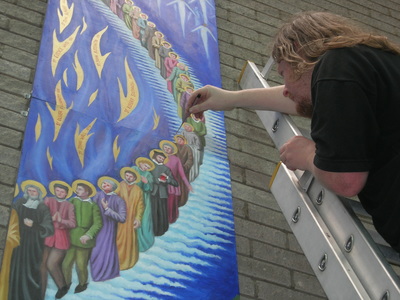 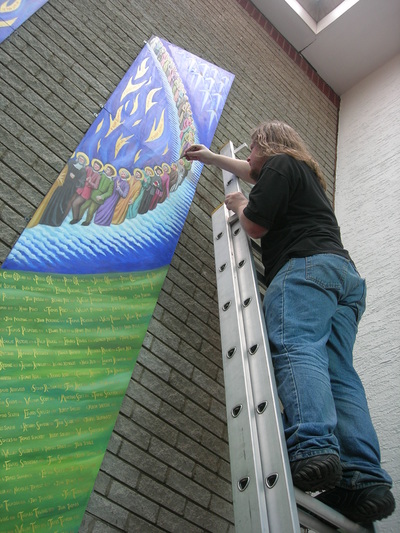 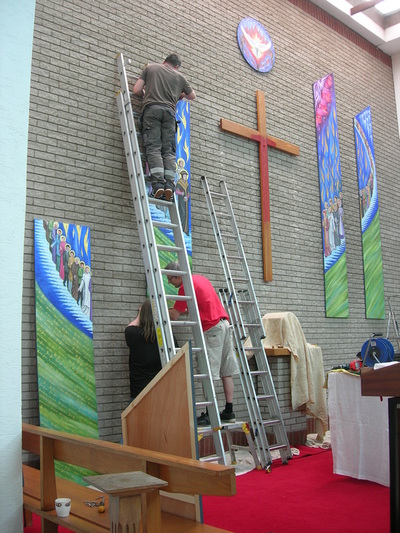 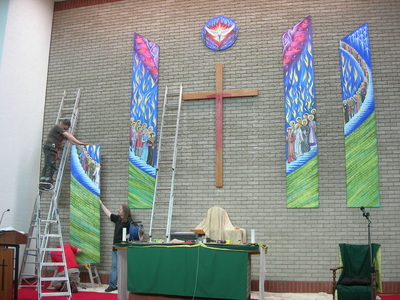 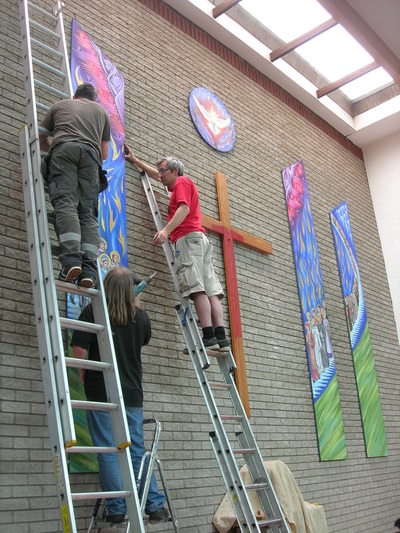 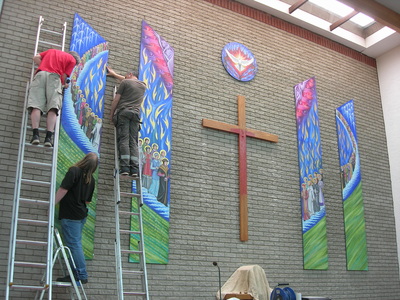 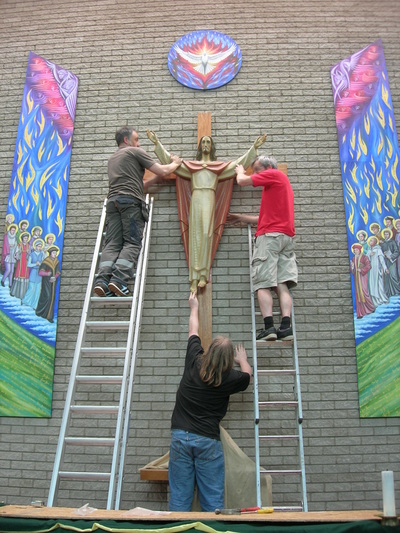