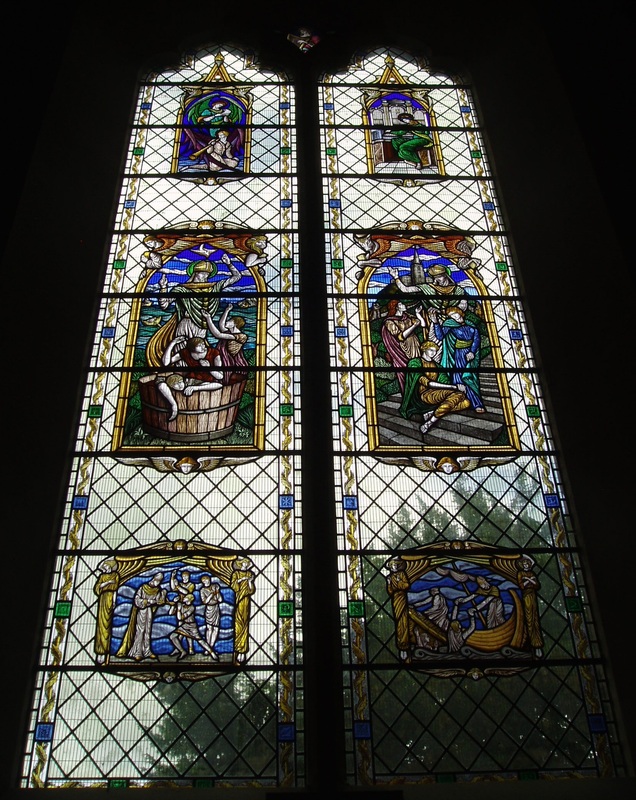 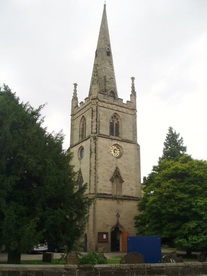 St Nicholas's church stands opposite the pedestrian entrance gate of Warwick Castle and is a church I'd seen in passing many times over the years. Medieval in origin, the church was entirely rebuilt in the 18th century in Gothic style with a prominent west steeple and a spacious nave, square in plan with aisles as tall as the main vessel (a 'hall church'), which made the aisle windows all the larger and more important as light sources.

The chancel was rebuilt in the Victorian era but later walled off internally in the latter part of the 20th century, removing at a stroke the interior's focal point and leaving the stained glass in the aisle windows all the more prominent. Three of the windows contain Victorian or early 20th century glass, whilst the fourth had an abstract design executed in applique in the 1960s; this window was failing badly with it's glued-on elements falling regular and causing a hazard, thus by the late 1990s it had been decided to replace it with a new window. 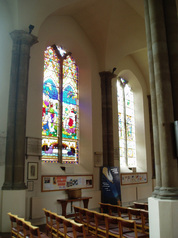 I had started working for Norgrove Studios at the same time and was eager to seize this opportunity when the chance to design it was offered. However it was soon clear that serious limitations would affect any design as the studio and client both desired a largely plain, quarry glazed composition containing a few traditional pictorial panels based on the life of the church's patron saint, St Nicholas.

The result is a window shaped by compromise, somewhat backward looking in concept in a desire to blend in more than it's predesscor, but I can't help feeling uneasy that a very modern work was replaced by something approaching pastiche. Without the constraints I would have offered a much more fluid, flamboyant design, but this was very much a case of taking up the challenge of swallowing one's pride and recognising the tastes of those paying for the work had to be acknowledged regardless of my instincts, and besides, this was an opportunity too good to miss, and it remains my largest ever church window (and one of my only traditional Gothic shaped ones).