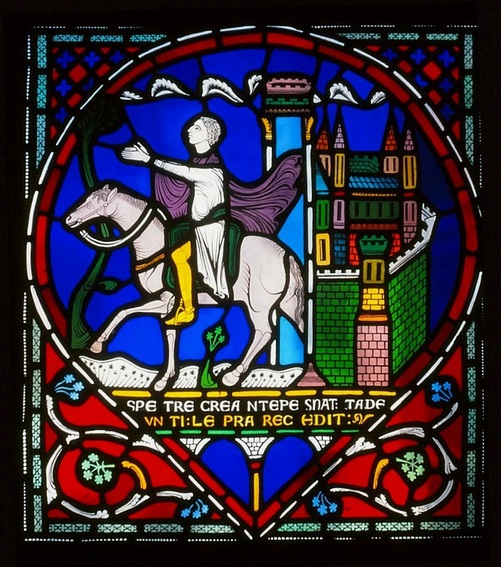 One essential skill the stained glass artist must learn is the ability to copy the work of previous generations, which in itself is a lesson with much to commend it. It is an ideal way to gain a greater appreciation of the skills of our ancestors, and an interesting way to immerse oneself in a world where instructive imagery in glass was accorded far greater significance than today.

The above panel is a copy I made many years ago of a panel of early 13th century stained glass at Canterbury Cathedral, a scene from one of the 'Miracle Windows', showing a man on horseback leaving the city cured of his ailments following a visit to the shrine of St Thomas Becket. The painting is simple and linear, but has an appealing directness and clarity of style. The colouring follows the original as closely as possible (I took some liberties with the surrounding ornament, moving it slightly to sit in a rectangular frame, which looked better in isolation than a straightforward copy of the pie-wedge shaped original work).

I would relish the challenge of making further copies of medieval work as it is a period I have a great affection for (and saves me the trouble of coming up with a design!). I will happily produce facsimiles of favourite panels of ancient glass for any client with a special interest in medieval art. The originals can only be regularly enjoyed by the regular congregations of specific churches or in museums, so why not commission a new panel from an old design? 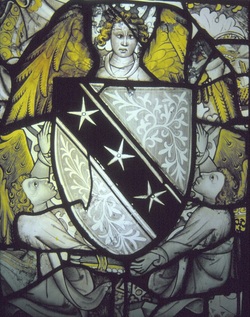 I am also experienced in reproducing damaged or lost elements in historic windows, such as in this panel of 15th century glass from All Saints Church in Worcester. Over the years the panel had become patched and jumbled and important elements lost. It was repaired in 2000 at Norgrove Studios where I was asked to recreate the missing angel on the left hand side, which I did by copying his surviving opposite number as closely as possible.

The balance and legibility of the design is thus restored, enabling the viewer to read the image as it was meant to be. The glaring brightness of the plain missing sections drew the eye disproportionately before, limiting one's appreciation of the original work. By sympathetically replicating missing elements (including part of the head of the topmost angel too) the harmony of the piece is restored.

Again this was a hugely rewarding task to be given; as a further step I would like to replicate entire medieval panels for the pleasure they bring. 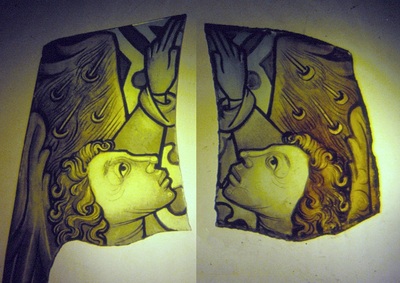 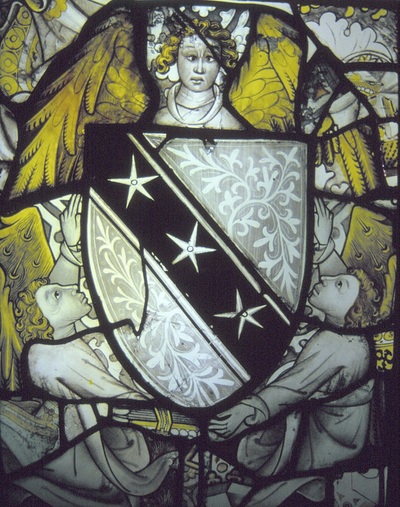