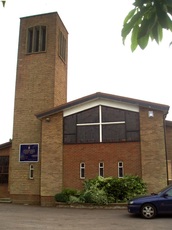 The Sacred Heart Roman Catholic church in Bilton, Warwickshire, was originally built in 1958 on a traditional plan with an oblong nave and chancel in one chamber, but the church was dramatically re-organised and extended in the early 1990s under the guidance of Fr Paul Chamberlain, wherein the axis of the church was re-orientated by 90 degrees with a centralised granite block altar in what was the heart of the old nave. The 'south' nave wall was removed to allow an extended aisle and ambulatory on this side. The former main entrance narthex was blocked up to create what is now the Blessed Sacrament chapel. One of the most dramatic innovations in the re-ordered church is the full immersion font, a cruciform marble pool set into the floor before the altar, evoking the earliest method of Christian Baptism by immersion in the River Jordan. 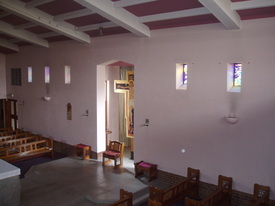 The two main stained glass windows on either side of the old nave were removed and re-sited in truncated form in the new extension, and in the place of the northern one a large crucifix (painted by Fr Chamberlain) has been set up as a focus behind the new altar. Flanking this are six high windows on this wall for which I was commissioned to create stained glass in 1998-9.

The original suggestion was the Spirit of God moving over the waters as mentioned at the beginning of Genesis, but my suggestion of taking this concept further to embrace the days of Creation, given that we had the correct number of windows, was well recieved, though I tried to retain the original idea in spirit by representing the presence of God in a fiery spirit-form above the waters, a theme that connects all six windows (and honours Fr Paul's original desire to have a flow of water either side of the altar to symbolise that flowing from the rock struck by Moses). The windows were designed and made in the same order as the subjects they portray and installed in two groups of three. I am greatly indebted to Tim Clevely for his help with some of the leadwork and for taking charge of the installation. 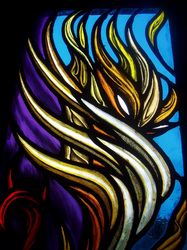 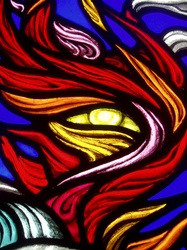 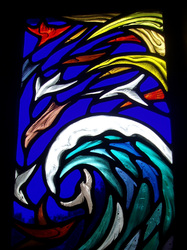 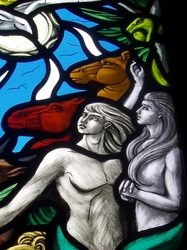 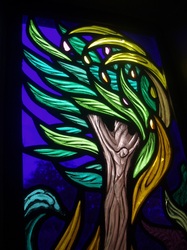 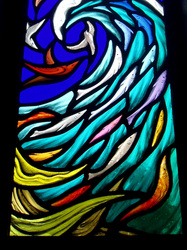 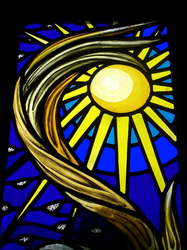 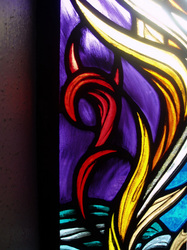 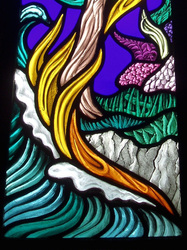 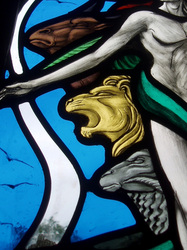 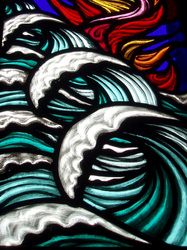 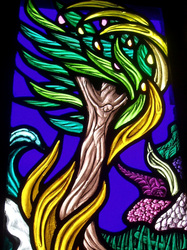 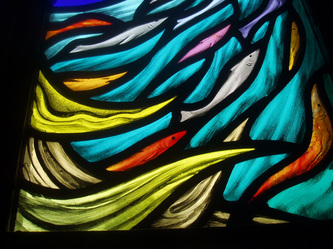 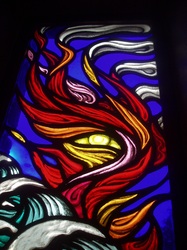 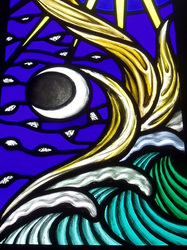 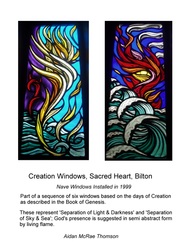 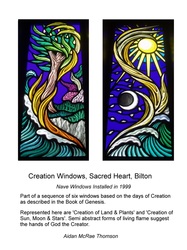 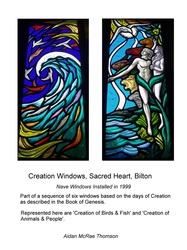 This remains one of my all time favourite projects, a delight to work on; there was considerable freedom to do something bold with a more stimulating brief and the small scale of the windows allowed for greater richness and colour without depleting glass stocks too seriously! For more photos of the church see my Sacred Heart, Bilton set on Flickr.